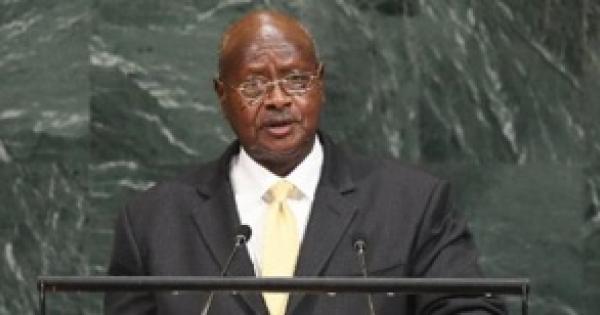 MEETING HELD AT THE HOME OF H.E. PRESIDENT Y.M. MUSEVEN1, THE

The meeting started with a prayer led by Rt. Rev. Bishop Ruhindi at exactly

11.00p.m. who prayed for good deliberations.

The Chairman, H.E. welcomed the Basita Clan and other clans present in his

home. He briefed members present the purpose of the meeting and thanked

organizers for a good job done.

President. He directed Hope Kivengyere to act as a link between his office and

these people at grass roots.

so that they could be heard in society and Uganda at large.

the Hima clan is to remain vibrant and rich.

H.E. told his listeners that if they cannot use the opportunity maximally, their

daughters and sons would blame them in future.

them to achieve their desired goals as:

1. To have the highest education qualifications during his term of office for

2. To make sure they are the richest people in Uganda with the 50 years

3. To make sure they control the army and have the highest ranks in the

4. To ensure that they take charge of all the resources in the country

5. To ensure none of those not concerned, not to know about the action

that they could dominate the ISO, PPU, ESO and Military Police as this would

only kings in the region. He said that the master plan couldn’t be achieved

necessities to maintain these issues.

At this juncture the chairman directed Mr. Elly Karuhanga to take charge of

The chairman also directed Mr. Kirimani to take charge of educating the

daughters and sons internally, especially to ensure that he put up special

school in Nyabushozi to cater for the interests of the group,

from Nursery upto Secondary, which was passed with no arguments.

members on the real discussion by introducing a new chapter of how H.E. could

be succeeded after his term of office.

On this point Mrs. Jovia Salim Saleh begged the members to ensure that after

H.E. the next president must come from the Basita clan. She said that she had

country. The members resolved that she was not in order.

to the president if the master plan is to succeed. He warned that if the Bairu

and non Bahima clans got to know about the action plan, it would fail to take

objectives of the action are to be achieved. He suggested that Salim Saleh had

He also suggested that someone close, possibly the son of H.E. should be

groomed to take over the reigns from Salim Saleh. This too was agreed on and

the group begged H.E. to look around for a boy who would be groomed.

take power from the clan. Death was suggested for the potential leaders who

would attempt to fail the master plan.

a) Deny other people access to economic resources through:

i. Overtaxing individuals and companies, which don’t belong to our people and

protect those of our people.

iii. Selling Parastatals and public enterprises that others don’t gain from them.

reap maximally while being protected from prosecution.

c) Destruction of the economic, military and political will of Northern and

disunity among the Buganda.

e) Uniting all Bahima in the Great Lakes Region and awakening their political,

f) Participating in the exploitation of economic resources of rich neighboring

enhance achievement of this plan.

Members recommended that all those given responsibility must ensure the

achievement of the objectives. H.E. was mandated to appoint committees or

individuals to implement the different aspects of the master plan.

Confidentiality must be ensured at all costs.